Sai Gitanjali at JP Nagar in Bangalore welcomed devotees for the wonderful occasion of the Ninth Anniversary (completion of 468 weeks) of Sunday Narayana Seva on 17th June 2018.

Sunday Narayana Seva, with the Divine Permission and Blessings of our beloved Swami Bhagawan Sri Sathya Sai Baba, was started 9 years back by two young boys – Murali and Nikhil. The Seva, over the years, with the Grace of Bhagawan, has scaled up to benefit over 50 Narayanas every Sunday, and has a strong and dedicated volunteer force.

The 9th Anniversary was used as a special occasion where Annapoornis – the families who cook delicious and healthy food for the Narayanas, were invited. Also, all other volunteers were invited. These silent soldiers of Swami who make the Seva possible every Sunday were treated to some special bhajans, followed by a couple of short talks and interactions emphasizing the importance of Seva in our lives. Also, a couple of incidents where Swami’s Presence was felt during the Seva were shared, and then Mangalarthi was performed. A delicious breakfast Prasadam was served to all. At the end, the devotees were given Swami’s gifts in the form of a desktop photo frame of Swami and a couple of fridge magnets with Swami’s images.

As for the Narayanas, on this joyous occasion, Amruth Kalash Sets along with hygiene kits and towels were distributed along with the regular food packets.

The 9th Anniversary Celebrations carried a festive feeling all through, and Swami thus blessed everyone with Bliss on this occasion!

Here are few photos from the event: 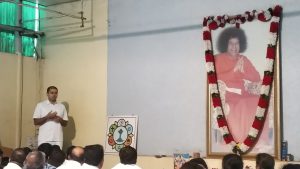 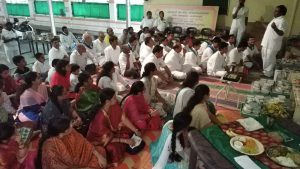 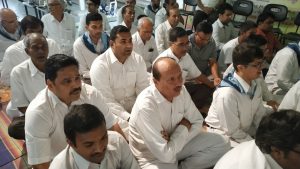 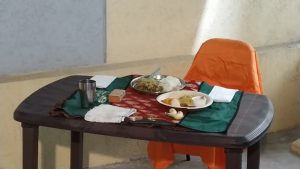 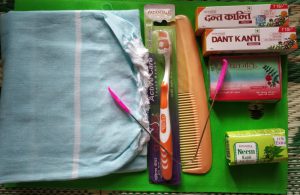 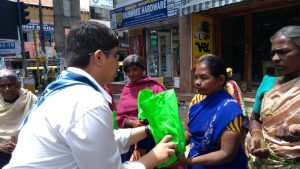