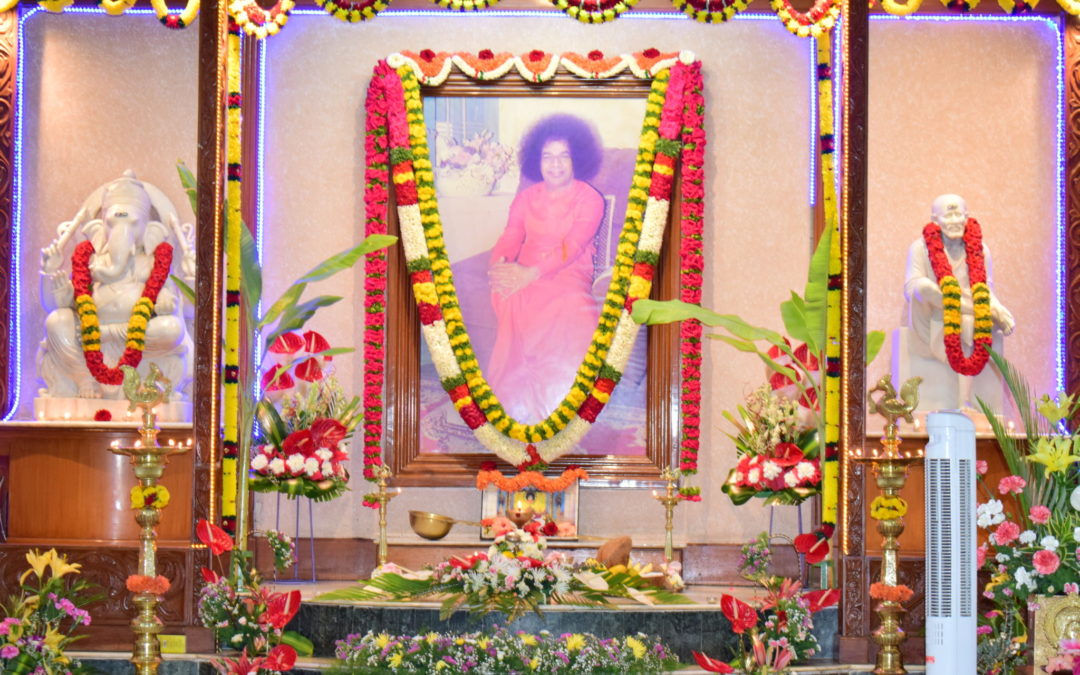 The 20th anniversary of Sai Gitanjali was celebrated for 5 days starting from Wed 24th May 2017 to Sun 28th May 2017 (Anniversary day). Please click here for the full report.

Photos of Bhagawan during inaguration: https://www.flickr.com/gp/dpmahesh/gF10yg

In subsequent years, Swami gave us the unique opportunity of His close Darshan, offering of Bhajans in His Divine presence at Brindavan ashram.

During this 20th anniversary, we at Sai Gitanjali had a 5 day programme both in the morning and evening, covering special bhajans, various service activities, Maha Narayana Seva, service at Belaku Vriddhashrama, Bal Vikas programs and a musical program by Sri. Maruti Prasad and party in the evening of Saturday 27th May. On the anniversary day, we were happy that Dr. Prithvi Raval son of Dr. R.S Padmanabhan was the chief guest who addressed the gathering. The program concluded by offering Maha Mangalarathi to Bhagawan and distribution of specially prepared prasadam for the devotees.

The 5-day program started by donation of daily provisions and essential groceries to Sai Ashrayadham – A home for the blind and orphans at Belthur Medahalli Road, Kadugodi Post, Whitefield by the Seva wing of Sai Gitanjali.

The evening program started with Deepotsavam – lighting of 108 lamps at the main altar. This was followed by special bhajans by all groups of singers. The program concluded by offering Maha Mangalarathi to Bhagawan. Nearly 56 devotees attended the program.
Day 1 Photos: https://www.flickr.com/gp/dpmahesh/Wi8239

The second days’ activities commenced by performing Maha Narayana Seva to around 850 patients and attendants at SSSIHMS, Whitefield.

In the evening, the devotees gathered at the entrance of Sai Gitanjali and offered bhajans during the Parikrama of the mandir 9 times and then continuing the bhajans in the mandir hall. Nearly 77 devotees attended the evening program.
Day 2 Photos: https://www.flickr.com/gp/dpmahesh/79n371

In the morning devotees gathered at the Belaku Vriddhashrama, Jayanagar 9th block and bhajans were offered by the Sai Gitanjali Mahila team. This was followed by Maha Mangalarathi and Donation of daily provisions, Sai Protein Food and Nama Likhita Japa books.

Narayana seva had been organized for the inmates and others. Nearly 30 devotees participated.

In the evening, there was special bhajans by all groups of bhajan singers at Sai Gitanjali.
Day 3 Photos:  https://www.flickr.com/gp/dpmahesh/8B97aE

The day’s program started by providing Amrutha Kalasha sets to the needy families at select locations. The Bal Vikas team organized a very interesting program at Pragati Charitable Trust, Govt. Primary School, Lalbagh East Gate, Siddapur with bhajans, talk on Bhagawan Baba and His ideals, distribution of stationery items, T-shirts and sweets to the boys.  Nearly 30 boys participated. This was followed by Maha Mangalarathi and Maha prasadam was distributed all students.

Our Bal Vikas team is reaching out to many schools in the neighbourhood of Sai Gitanjali propagating Bhagawan’s ideals. This is the first time they have taken up this school for this endeavour.

In the evening on Saturday, we had a musical program and bhajans by the well-known bhajan singer Sri. Maruti Prasad and party. He earlier had the rare opportunity of being blessed by Bhagawan. The performance was soul stirring and was very well received. Nearly 172 devotees attended the evening program.

This was followed by donation of kitchen vessels to the sevadal canteen at SSSIHMS, Whitefield.

In the evening the program started at 5:15 pm with invocation, lighting of the Jyothi and a few bhajans.

With Bhagawan’s Grace and Blessings, another noteworthy feature of Sai Gitanjali worthy of mention is the 3 state level offices that are functioning from Sai Gitanjali premises. They are

Next, Dr. Prithvi Raval who was the chief guest on this occasion spoke about his close association with Bhagawan since his childhood and said “Growing up with Swami meant: phases of fun, being disciplined, orderly, neat and sensitive to others feelings, humanness, acting on Swami’s words and dispersal of affection and Love”. He further said, “HE made me feel like His best friend in all the 60 years since I have known Him”. He also dwelt on the teachings of Bhagawan and their implementation in our daily lives.  Everyone felt that this was a magnificent presentation.

This was followed by distribution of certificates and mementoes to Bal Vikas students. Three persons were given certificates of appreciation for their service in the fields of

The program concluded with offering of Maha Mangalarathi and performing of Pushpa Archana to Bhagawan’s Divine Padukas by nearly 230 devotees who attended the evening program.

Here is a photo summary of the 5 day event